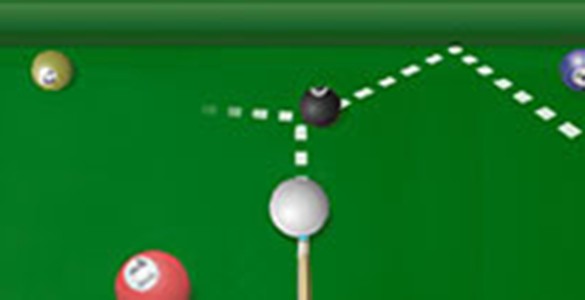 It’s not LinkedIn. LinkedIn is networking, which is kinda, sorta the same, but not the same. In the situation I am describing, a bank shot is a cold call shot at someone in the organization in order to get to the target you are after. Let me explain.

We were recently working on a problem of trying to formulate a go-to-market strategy for a client, and one of the markets we were aiming at was totally foreign to our client and ourselves. We carefully formulated a letter to the President of our targeted Fortune 500 company, indicating in rough, but vague-enough terms, what we were after and that we didn’t know exactly who to contact. In two days, we had a response with the exact name of the target we should contact, with these words:

“Hello Jim, “BANK SHOT” passed a letter to me that you sent him recently and asked that I follow up with you. I am the TARGET and I’d be delighted to talk. I wasn’t sure from the note the exact nature of your business, so it would probably make sense to talk on the phone. Would you like to set up some time in the next month to chat?”

Three things made this bank shot work. First, the bank shot was properly executed. As in billiards, bank shots are a combination of measurement, speed and execution. Too fast and you’re off; too slow and you’re off. The two-day response back to us was the result of the second thing that made this happen: we overnighted the letter. A letter delivered FedEx demands attention. And it gets it. And finally, the target of our bank shot was the top guy. Inevitably, the higher you aim your bank, the faster it rolls downhill to the right target.

This type of bank shot almost always works (even when we receive a “No, not interested,” it is viable information that keeps us moving down the road to a solution).

So why don’t people use it more?

Most people explain it this way: “I don’t want to be seen as going around the target.” What they mean is, if they don’t have a direct shot, they will be construed by the target as trying to “force” a meeting. The feeling is that “going around a person” is never any good – the target would hold a “grudge” and business would become impossible once contact is made.

But, nothing could be further from the truth. In a true bank shot, you don’t have ANY connections with your main target, or the bank shot: it is a cold call shot, and there is nothing outside of a personal introduction that is more effective in new business. Why? It has to do with helping people. Let me explain further.

I remember meeting my now good friend who owns eleven stores in Florida. When we first met, he was taking me to see one of his stores – a pawnshop. Now when he said that, I have images of pawnshops flood my mind from the movie, “The Pawnbroker” staring Rod Steiger (if you haven’t seen it, you must see it!). The story is about a concentration camp survivor who runs a pawn shop in New York. There’s one scene (I don’t want to give it away) at the end which is unbelievable, because the whole story is about this guy who no longer feels anything. See the movie.

Anyway, that’s not the kind of stores my friend runs. These stores are in Naples, Florida and they look more like retail stores than pawn shops (even today, the television show doesn’t do justice to the types of operations he runs). He took me to one of the stores when we first met, and on the way we were having a great discussion about business. It was the first time we met, and he suddenly asked, “You know why we hit it off, don’t you?” “I think I do,” I said. “We have a lot in common in business philosophy.” “No,” he said. “While that’s true, the real reason is you don’t want anything from me, and I don’t want anything from you.”

But we did. We wanted to exchange stories about business. It was a mutually beneficial exchange – and it is exactly what happens in a bank shot. We were actually helping each other: He was showing me his business, and I was asking his advice.

And while you might ask,“Isn’t asking for help wanting something?” It is, but it isn’t. Ask anyone who gives help. The giver will tell you that he or she gains as much as the receiver of help does. It’s a mutually beneficial relationship that exists at the moment of contact.

Bank shots are about feelings – the feelings of being able to help people. And that is ultimately why they work. Besides, bank shots do not have to always take written form. Voice mail is an excellent way to execute a bank shot. Leaving a carefully worded message asking for help in finding the “right” person often leads to a call back from that person.

We hear repeatedly that in today’s fast-paced world, time is the currency. People don’t have enough time to meet, to read, to think. One client recently said that “People don’t read” when talking about his target market; another client arrives at works and goes to endless meetings until it is time to leave, never getting anything done.

These are often just excuses for not taking real action. For example, how do you learn anything if you don’t read? Would you rather be operated on by the brain surgeon who read the bullet points – or the book? If time is the currency, then we should realize that every minute counts – or should count – for something, and that time wasted is truly the only non-renewable resource in the world. We will never get it back once it is gone.

Bank Shots in business are ways to hit a target when your direct tactics don’t work. You will find that they are time well spent, and who knows? You might learn something! For more conversation about bank shot strategies, contact us here, or call 847-358-4848. We’d love to hear from you.