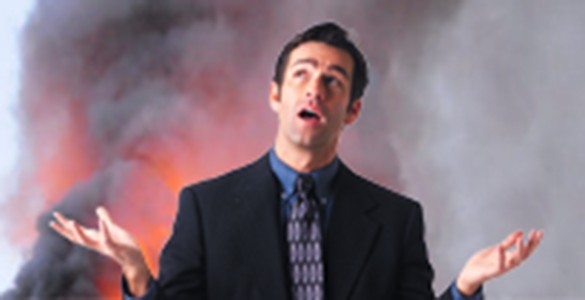 One of the legends about Nero was that he was fiddling while Rome was burning. People use that story to describe people who, while there’s a fire (crisis) raging around them, go about their business as if there is no fire or crisis.

Here is the question: what is a fire in business?

If you read our piece, “A Not-so-Funny Thing Happened to Me on the Way to the Forum,” the caller we documented was trying to put out fires. But in business, fires happen all the time. “I’m putting our fires,” is a common sentence used by executives each day. Or as a COO told me recently, “I’m a firefighter.” But again, how do we define a fire?

Fire is both dangerous and comforting. Man would not have existed if he wasn’t able to find out how to start a fire and keep warm in the elements (we’d all be living South). In business, what starts fires?

Fires can be large, small, be put out before they start, smolder for awhile before they break into fire. Many people consult Wikipedia for definitions these days instead of Webster because there’s more than a definition in the former. Here is what Wikipedia says about “Fire” in the first paragraph and then our discussion of how it relates to business (Wikipedia goes on and on, but this will do for this discussion. The entire entry can be found at http://goo.gl/Cd2oZ).

“Fire is the rapid oxidation of a material in the exothermic chemical process of combustion, releasing heat, light, and various reaction products.”

“A Fire in business is the rapid release of energy in the process of evolving events, which releases tempers, information flow, and various reactions from people both involved and not involved.”

In other words, a crisis. It’s something that triggers people into motion. The “something” could be anything – the wrong word in an e-mail, a misplaced purchase order, saying something in a meeting, anything. But usually, it’s a piece of information that sparks the fire (and remember, the information can be true or false).

Wikipedia goes on to say that:

“The flame is the visible portion of the fire.”

In other words, there something “invisible” about fire, as it stands to reason if you have a “visible portion” there must be something you can’t see going on. The same is true of a business fire. Most people see the flame of the business fire, but often forget there are other “invisible” things going on that are around that flame. Keep that in mind.

“Depending on the substances alight, and any impurities outside, the color of the flame and the fire’s intensity will be different.”

In business, this is true as well, as there are big fires and little fires. Here is the final part of the Wikipedia we want to call your attention to (read it with a business point of view in mind):

“Fire in its most common form can result in conflagration, which has the potential to cause physical damage through burning. Fire is an important process that affects ecological systems across the globe. The positive effects of fire include stimulating growth and maintaining various ecological systems. Fire has been used by humans for cooking, generating heat, signaling, and propulsion purposes. The negative effects of fire include water contamination, soil erosion, atmospheric pollution and hazard to human and animal life.”

I was at a client recently where the conversation revolved around a recent trip the client had taken, and what a wonderful time that was had by all. The client, like Nero, was completely unaware (or acted unaware) of the fires raging in the company. Quality problems…personnel problems…morale issues…service issues. Some where little fires, some were big fires. But then, there are always fires in business, right?

One of the things about a fire is that if it is really a fire, your total focus is on putting it out. If you ignore a real fire, the real fire will consume you. The question, then, is what I said at the beginning: in business, what comprises a fire? Because in business, there is no such thing as a big or little fire: it’s fire!

As a young man, I would rush home from school, change my clothes, and rush out to play softball or basketball with my friends. My Mom would yell at me as I ran through the door: “Where’s the fire?”

I’ve learned through our clients (we serve companies in the business of fire) that the best way to handle a fire is to avoid it altogether. Because when a fire occurs in business (unlike real fire), there’s a lot of people trying to fight it that don’t know a damn thing about firefighting. Just ask a fire fighter. It’s not an easy task. And, it’s dangerous. If you don’t know how to fight a fire, and you go into it to fight it, you are likely to lose your life.

The same is true in business. If your business is facing fires, and you try to fight them yourself without the experience of fighting a fire– or worse, you start fiddling while it burns all around you – what do you think will happen?

We are experienced marketing communications fire fighters. And while not all fires are the same, we have trained ourselves to put out fires neatly, quickly, and efficiently, but more importantly, to prevent them from happening. Let’s have a discussion. For more information about business fires, or if you have a different point of view, make a comment. Thank you.