Founded in 1921, the American Institute of Steel Construction works to serve and unify the structural steel design community. AISC promotes the use of structural steel through specification, education, quality certification and more.

Problem:
Advertising is most often thought of as a way to promote a product brand. For groups such as The American Institute of Steel Construction (AISC), a technical institute and trade association for the structural steel industry, however, awareness and advocacy are the “selling” points. Specifically, the AISC had two objectives for running ads: to promote steel as the construction material of choice and to present AISC as the source for professional education and supporting services.

Solution:
Interline Creative Group’s advertising creative team concluded that a series of testimonial ads would be the most effective approach. Profiled subjects, chosen based on their professional prominence and known support for steel construction, served as the spokespeople for steel in general and AISC specifically. Interline writers interviewed these subjects and presented the information as first-person accounts. Each ad began with the subject’s background and led into their reasons for using steel as opposed to other construction materials in their building projects. The ads personalized the steel market while covering industry problems addressed by steel, confirming AISC’s important role in the industry. Ad rotation kept the message fresh while generating repeat exposure to AISC’s key audience.

Result:
Follow-up ad impact surveys found that Interline’s ads significantly increased specifiers’ awareness of and interest in using steel in their building projects. Meanwhile, the ads raised AISC’s profile in the industry, drove traffic to their website and delivered hundreds of worthy sales leads to the association. 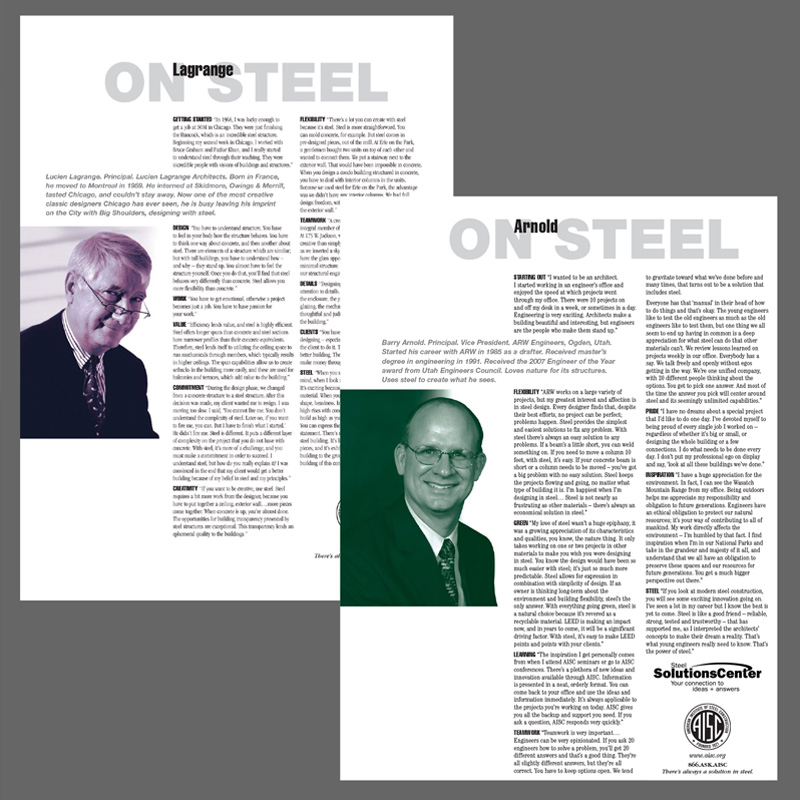