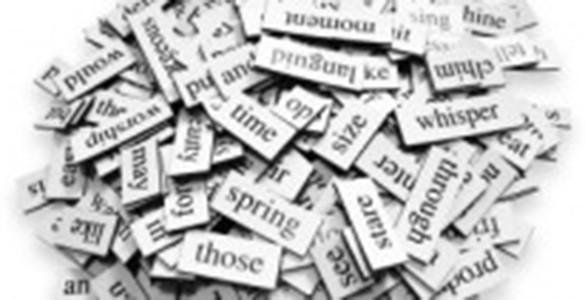 I read recently about a CEO who wanted to change his company’s direction and “broaden our risk appetite.” When I heard that, I was reminded many years ago about a chart I saw. This chart had three columns of words, numbered “0” through “10” and the person looking at the chart could pick three random numbers, combine the words, and, well, sound really, really smart.

Of course, no one knew what the heck you were talking about, but it sounded as good as broadening your “risk appetite.” I dug into my files and found the chart, and I’d like to share it with you.

Pick three random numbers — say 8-3-7 — and combine the words from the columns, so that in this case, the words are: “Compatible reciprocal projection.”

Or how about “Functional third-generation concept” — a “4-8-5.” Sounds equally intense.

Words are representations of things — or at least that’s the theory. A lot of the problem with business language is that there’s a belief that using words in combinations like those in the list sounds impressive because they capture something that seems profound. For example, everyone these days is doing “deep dives” into a project, or taking a “30,000 foot view.” Like I said: words mean things, but the questions is, really, what do they mean?

The problem is that words mean different things to different people. I mean, who can argue with a functional third-generation concept. It means, really nothing. But the real trouble with language is that you might think you know what a word or group of words means, and your audience might think they do too, but if they don’t match, well, communication falls apart pretty fast and can’t be put back together again.

Lewis Carroll knew this. In Through the Looking-Glass, Humpty Dumpty and Alice are having a discussion. He says to her, “And only ONE for birthday presents, you know. There’s glory for you!” Alice replied, “I don’t know what you mean by ‘glory.” Humpty smiles and tells her, “Of course you don’t—till I tell you. I meant ‘there’s a nice knock-down argument for you!” The remainder of the conversation makes the point:

Recently we were on a conference call working deep into the world of IT. Words were being thrown around like those from my list. As I listened, I started to Google some of the words. For example, I heard “Happy Path.” Little did I know that it’s a real word in the that world that means  “a default scenario featuring no exceptional or error conditions.” Every word I heard and Googled, I was offered a definition that helped me understand the entire conversation. What did we do before Google?

Somehow, Twitter is bringing us back to simplicity. We are FORCED to use 140 characteristics (now 280) to get a point across. Very difficult. Very different than using strings of words that mean, well, whatever the writer thinks or wants them to mean (but boy, they can really sound impressive).

I once worked for a guy who had this philosophy: “Why use 10 words when 100 will do?” He meant it. I think that might be why I like long copy to this day (just kidding! I always loved long copy).

Let’s have a discussion. Or perhaps I should say, a balanced, monitored exchange. For more information about simple communications, or if you have a different point of view including your own three-column chart, go to http://intrln.com/contact and tell us talk to us (you can use more than 280characters!). Thank you!