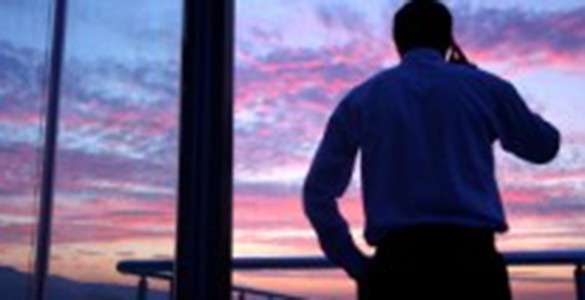 On a recent business trip, as I prepared to work on an article at the airport, there was someone on the phone a couple of work stations to my right. His voice carried, and I couldn’t help but listen. After a couple of minutes, I decided to stop work and take down what I was hearing.

I share what I heard with you because I have heard this story many times, in many ways, but I haven’t heard it in the cold reality of simply listening as an objective listener in an airport, a kind of anonymous bystander, where luck would have it this took place. You’ve been there, haven’t you? You are in a place, and then you begin to overhear someone talking, either to another person, or over a phone. You begin to listen, and then suddenly, you are drawn into the conversation or exchange? (By the way, the … indicates the caller is listening, not talking, and the names in the monologue were changed to protect the innocent).

“…I got ten minutes and I got to get three quotes to get done. So let’s keep movin’. What else you got…No…that’s one of the hundred thousand things I gotta do today….

There was an urgency in the person’s voice. A Harvard Business Review post says that multitasking leads to as much as a 40% drop in productivity, increased stress, and a 10% drop in IQ (Bergman, 2010). Even when we watch television, we are multitasking more than ever before (Deloitte). We all experience this condition, but the question is, what do we do when it happens? The caller offers one way to handle stress.

“I can’t hear you…yes…well, he’s saying he never had training, and he was holding the part multi times, and he didn’t know what he was supposed to do, so he broke them off…well, nobody ever told me we would be charged for that…ok…right now, what he is sayin’ is we sent in these sub panels, and the popped off, so it’s our fault. I’m sending James there as a repair call, not as a training call, and if I’m going to have to turn around and charge him, I need to know that upfront…yea…can you call him today and work that out a little? I don’t have the time to have a 30-minute argument with the guy. I mean, the problem is I didn’t set the specification. I didn’t know we charge to train people like this. But we never had in the US. Mario said send James…but James is goin’ there on Friday. It’s Wednesday today…I don’t know when…when I get to Detroit I have a 45 minute drive. I can probably do it then. I really have to run. What other issues do you have on your list…

Who is to blame for the mishap? In any situation, as our caller demonstrates, there are mis-understandings. Sun Tzu in his Art of War wrote that when the general is weak, bad things happen. Ultimately, when the general’s orders are not clear and distinct… “when there are no fixed duties assigned to officers and men, and the ranks are formed in a slovenly haphazard manner, the result is utter disorganization.” Nothing has changed since he wrote that, as evidenced by our caller. There was a complete breakdown on who was responsible in listening to the monologue, the conditions which will rectify the situation, and so on. The result will be an eventual disaster in that customers will defect. Business will be lost.

“So …So…So…there were five models that I asked you to order. Did you order those or did you not…yea and I replied back we made every one of these. Why should I have to provide the dimensions, we made these a hundred times…It can’t be me. I don’t do drawings. I gave you guys the model numbers. I said here are the models I want. So, you are waiting for me to do something?… Yea, we can order it from PSI…we don’t know if it will look identical. I suggested this three weeks ago. I got to ship all 40 next week…

More of the same. Sue Shellenbarger in WSJ’s January 2012 issue wrote an article called “Stress is Good for You.” She pointed out that by learning to identify and manage individual reactions to stress, we can actually “develop healthier outlooks as well as improve performance.” The key is management of the stress – things like deep abdominal breathing and training in meditation – which obviously wasn’t happening with our caller.

“Huh?…I don’t know what they did…I…I…I don’t know. I thought you guys were ordering all the stuff from Asia. I need two pieces of glass to be there tomorrow because they have to assemble and ship on Monday. I thought this was settled two weeks ago…technically the 23rd that’s a week from today. Whether 23rd or 25th, it takes four weeks to get glass…Well they…and I don’t know if they did or not, can you call and check?…Right…right…what I told Harry is that get their supplier to overnight the stuff. Our supplier refused…Ok…

Will the problem be resolved? It is doubtful from listening to this monologue.

In one company we worked for, the supply chain management was revamped for “lean.” In doing that, contracts of current vendors in the sourcing channel were shredded. One fellow supplier told us, “I’ve been working with them for 25 years, and they just cut me. No explanation.”

The new supply chain sourced what the vendor was doing elsewhere, found it cheaper, and changed.

One year later, product failures started appearing in the field; it seemed like the new vendor didn’t quote “apples to apples” to get the contract.  The content of the parts being made had been altered ever so slightly to make the bid more competitive. In chaos theory, the butterfly effect is a phrase used to explain how small changes in one place result in differences (sometimes large) in other areas.

Every company lives in an inter-dependent system comprised of decisions. Change one thing, you change everything. So, it’s important to be careful what you change, as well as when you change it.

“Look, I’m trying so hard to sell, and all I do is chase issues like this. Sally doesn’t know anything I need somebody to take care of this two weeks ago. I don’t know when I’ll have time to call today to discuss this…Sure, but she doesn’t know anything, and she wasn’t here two weeks ago. Three months from now all this will be much easier, but in the meantime, you’re all I got…I mean, trust me, I’m trying to stay on top of all these relations and do my job, but my sales are down. I can’t do all of this and my job…

And still more frustration. But, what is the caller to do? Or perhaps a better question is, what should the person on the other end of the line do?

“Alright, so how do you want to handle these two units?…Yea, I’ll do it right now…OK…yea…I’m out of time…Yea…OK….sounds good. I gotta run. Alright, bye.”

This was perhaps a fifteen minute call, but a question you have to ask yourself is how often this conversation takes place throughout the US each and every day?

Perhaps a better question would be, could this conversation take place in any other country? If the US is going to be competitive, how DO we deal with situations like this?

Respectfully, I would suggest they get the thing done. This blog is not an indictment on US business; but it is a warning. If we increasingly hear monologues like this, it is only a matter of time before the doers end up doing us.

Another post I just wrote was “Powerlessness: Why Organizations Fail at Customer Service,” where I documented something that happened to me personally. The lessons were the same: when a problem happens, just fix it.

One of the individuals who understood this was Vice Admiral James B. Stockdale who was tortured over 20 times between 1965 to 1973 while a prisoner of war in Vietnam. In a lecture to the student body of The Marine Amphibious Warfare School at Quantico, Virginia in 1995, he said, “I had learned that fear and guilt are the real pincers that break men ‘s wills. I would chant under my breath as I was marched to interrogation, knowing that I must refuse to comply, and take the ropes: ‘Your eyes must show no fear; they must show no guilt.’”

Fear and guilt are great breakers of willpower, and if you re-read this blog, you will see that the person on the phone possessed both (as I’m sure the person being talked to did as well). You hear fear and guilt in the voice besides seeing it in the eyes.

What do you think? Have you experienced something like this? What did you do about it? We’d love to hear from you, and let you know what we might be able to offer to help.

Thank you for reading!