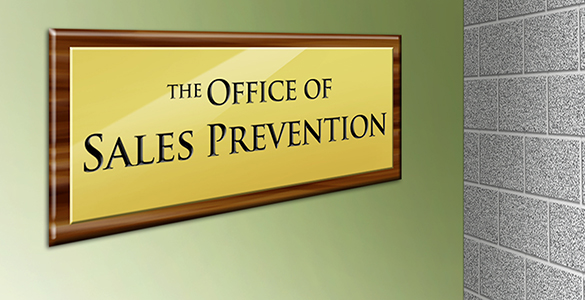 At the HighPoint MARKET where I was working our showroom with one of our clients, we got into a conversation about, of course, sales. Here’s what my client told me.

“We were putting together this deal with a major manufacturer, and everything was in place. The orders, the pricing, everything. Then corporate got involved and we were summoned to the office for a meeting. We heard ahead of time that the corporate office was going to kill the deal. They had decided it was too risky – after all the players in the channel had not only worked out all the details, but had dotted all the ‘i’s’ and crossed all the ‘t’s.’ So my partner and I arrive, walk up to the receptionist at the corporate floor, and I say, ‘Can you tell me where the sales prevention office is?’

She looked at me, frowning like she didn’t understand, as I smiled back at her. ‘Excuse me,’ she asked with her southern accent?

‘The sales prevention office,’ I replied with a straight face and slight smile. ‘We’ve been asked to stop by.’ Then she smiled back and asked my name. After telling her, she said, you can go right in. ‘They are expecting you.’

“We walked in and at the boardroom table were several corporate executives. They told us that management had determined that the deal was too risky because of the fabric of the furniture we had selected…no one had ever used that color (off-white) on a sofa. Now, we had tested this color already and gotten tremendous response. At the time, no one had it, and it was in our estimation, a winner. But you know, there is always risk involved. We were either going to hit it big, or really fall on our face.

So I ask them, ‘Are you telling you want to prevent sales? Because that’s what I am hearing from this room. I thought we in the sales preservation business, not the sales prevention business.’ We walked out with the deal signed after a short discussion. That product made more money in the next couple of years than anything they’ve seen since. I often use this story because in every corporation throughout this country, there’s a sales prevention office. You just have to find it, and confront it. That’s how deals are made.”

So, Where is Your Sales Prevention Office?

Is it in the IT department? One of our former clients had a bloated IT department with many people, running one of the top enterprise systems. Anything that didn’t fit that system simply would not be considered. The sales department needed a CRM system and asked if they could use one of the more robust CRMs available. “Not compatible with our system,” they were told. “We’ll do it, but it will require many hours of programming.” The CIO was touted as a thought leader. Actually, he was the head of their sales prevention office. They are still waiting for a CRM system.

Another former client’s national sales manager tried to get his management to agree to a tiered-type distribution program for their largest company: the more a distributor bought, the lower the price per piece. Management argued that they would be losing a lot of money by discounting like that. The sales manager said that without this program, there wouldn’t be any sales at all. “The customer is looking for these considerations,” he said. Management stuck to their guns, offering arguments that they would be setting a precedent. “Well stop me before I sell again,” the manager exclaimed. They didn’t do the deal and sales suffered.

In the severe downturn of 2009, one of our clients had excess inventory of a product. Their policy was to throw stock out, so we asked if we could have some. “What are you going to do with them,” we were asked? “Why, sell them of course.” The client snickered because nothing, if you will recall, was moving in 2009.

We applied and became a distributor and purchased the largest volume to achieve the best discount (about 100 pieces) and then began marketing the product – to a different channel. You see, our assessment was that one of the ways to handle a downturn is to channel jump – go into a different channel where the product is more likely to move as “something new.” And in this case, the product was perfect. We began marketing it with direct mail, offering a “buy one get one free.”

A couple of weeks later we were summoned in front of the VP of Sales. “What are you doing,” he demanded, shoving a faxed copy of our offer in front of me that he had obtained through his distribution channel. “What do you mean,” I asked. “We’re selling the product we purchased from you.”

“You’re not a qualified distributor,” he replied.

“But you approved our application,” I said.

“Look, you can’t sell this product in this channel,” he said sternly. He fired us.

Sales prevention happens everywhere when fear strikes (see our blog, a Not so Funny Thing Happened on My Way to the Forum). Or the status quo is threatened. But without risk and without risk taking, business simply doesn’t exist. It can’t. No pain, no gain. Remain the same.

For a discussion of how to eliminate the sales prevention office in YOUR company (or where to find it), give us a call.