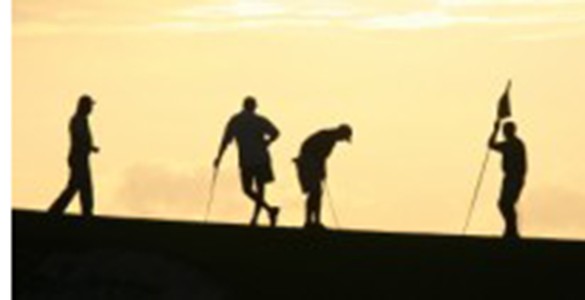 I don’t golf. Some people pity me because I don’t golf. But, I appreciate golf. Like anything else that happens in life, there’s usually a good story somewhere if you look, even if you don’t participate.

Finally, my friend explained it this way: “We have 25% more people than you do, so no matter how fast we play, you will always be faster than us. Like now. You realized on the fourth hole that we are slower. It took you four holes to realize that. We will always be slower because we have one more person, and it will get slower still for the remainder of the course.”

My friend, without hesitation, said calmly, “Go find yourself another friend and have him join you.” Then he got into his cart and went back to finish the course at his pace.

It’s hard to argue with math. A few years ago, Allstate Insurance lost a million customers. The article, in Crain’s, talked about auto policies falling 6% to 17.2 million. In the same article, Allstate wanted to broaden their “risk appetite” to grow in other markets. In the 10 states where they raised their rates, they lost customers. In the two states where the rates remained the same, they got new customers. Then the CEO said something really interesting: “Our market share losses are due, in part, because of lowering our ad spending during the previous six months.”

Advertising gets my interest because advertising is about math. There is the target circulation (group) you are trying to reach, the amount of exposures you use to reach them, and then the ROI. Coming from a direct response background (before starting this company, I worked at the 8th largest direct response agency in the country, now out of business). It’s always been about math: mail 100, get 10 back, 10%. How do I improve that?

But, the world is changing. Social media is taking this “formula” and bouncing it around, giving “receivers” of messages extraordinary power over the “senders.” In fact, social media is redefining “response,” period.

But math doesn’t change; it can’t. The 25% solution will always be there, and so will senders and receivers of messages. As much as people talk about social media this, or social media that, it’s still about math – the math of communication. I mean, who hasn’t been in a situation where you think people “get it,” only to find out only some of the people really understood what you were offering.

I was talking to a good friend the other day about social media. My friend thinks it’s evil. When I asked why, my friend said that there’s a lot of garbage on it, and garbage can be dangerous. I remember when I was a teacher in high school, we were going around the room and my sophomores were talking about what they want to be when they grow up. Astronaut, fire fighter, the usual answers were being tossed out. And then Rodney’s turn came.

“Because,” he said proudly. “There will always be garbage.”

Wisdom is like that; you never know where — or when — it will surface. And the wisdom of math is irresistible because it allows wisdom to surface faster than anything else.

My friend, however, is also right: there’s a lot of garbage out there. But then, if you think about it, there always was. Now we just have to collect it and sort it out ourselves! Math, ladies and gentlemen, can help you do just that.

For more conversation, or to express your opinion about math or social media, go to http://intrln.com/contact and talk to us. Thank you!