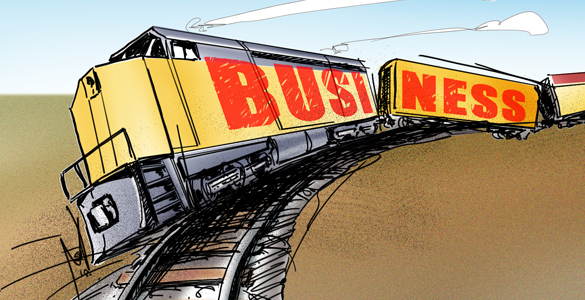 Most won’t remember Art Linkletter’s House Party, which ran five days a week between 1945 and 1969. I barely remember it, but one of the segments (later taken by Bill Cosby) was Kids Say the Darndest Things. Art would ask youngsters questions, and he’d get blunt answers – the kind only kids can give you. For example, Art asks, “What’s the first thing a fireman does when the alarm bells rings?” The kid answers, “He pulls up his pants.” Or, “What would be the first thing you would do if you were President?” Kid answers, “Keep my mouth shut.” 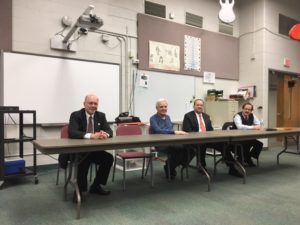 I served at a recent panel discussion (l to r are me, Bob Kramer, Eric Marzinke and Scott Gilbrich serving on the YEA panel) for YEA, a terrific organization that helps local middle and high school students with becoming confident entrepreneurs. The room was full of bright, eager wanna-be entrepreneurs and we were a panel of four entrepreneurs, there to share what it means to be a real one.

I always found that interesting because I never considered myself an entrepreneur since I started my business in 1990 after being fired for the third time. I told my wife, “I can keep getting fired and making a lot of money or I can try my own thing.”

I haven’t looked back. Now, making a living with 18 people working for me, I guess you can say that I became an entrepreneur. In any case, being a former teacher, I quickly related to the group of students. After letting my fellow panelists go first, I came around the table to engage them.

Three Things to be an Entrepreneur

It was a great experience. I told them three things they need to know if they were going to be successful: to listen, to work hard, and to have courage. Listening is important because that’s how you learn. The worst client to work for in the world is the one that knows everything. Working hard is essential. I told them, “Someone told me once the harder I work, the luckier I get.” Then I told them about the sign in my office I see every day when I arrive: “A day without work is a day without food.” I told them I’m always hungry.

These were discussions because I would ask the group questions, they would respond, and we talked as I drove home the point. By the time I got to the third point – about having courage – I asked, “So, what’s the worst thing that can happen to your business once you start it?”

Quickly, the hands went up and I called on them at random.

“You lose a customer.”

All great answers, but I was looking for one in particular. One youngster in the back of the room had his hand waving throughout the discussion. He clearly wanted to be called on because he saw I was still probing, so I did.

He stood up and proudly said, “Assassination!”

“The worst thing that can happen is you lose your business,” I told them. “But that’s okay because it’s just business. You’re still alive, you can start one again. That should give you courage because you’re going to face a lot of unknowns. It’s called getting experience, but some experience can be painful. Our young friend there is really more correct than what I just said, because if you get assassinated, you not only lose your business, you lose everything. I’m going to remember that!”

We had more discussions and the meeting ended.

On the way home, I realized the importance of culture from the youngster’s comment. From where he came from, assassinations must have been commonplace – much more so than where I came from, though I lived through them with the assassination of the Kennedys and King. I think we should all be aware of not only culture, but the relative nature of business. I wrote about that in one my blogs, Things Could Always be Worse. And they can – unless you get assassinated!

What’s the worst thing that happened to YOUR business? Let me hear from you.

2 thoughts on “WHAT’S THE WORST THING THAT CAN HAPPEN TO YOUR BUSINESS?”