Founded in 1931 by advertisers, agencies and the media industry, BPA is a not-for-profit organization that audits advertising publications. BPA also provides compliance and assurance reviews for government, industry, and organizations.

Based on in-depth interviews AIM conducted with B2B media companies and marketing executives, BPA learned most media buyers and advertising/marketing executives did not know who BPA was or understand the information on a BPA Audit statement. More important, most professionals responsible for evaluating and making media decisions did not understand the need for third-party verification of audience and internet traffic statistics. Before the massive growth and development of electronic media, marketing and advertising executives relied on audited audience statements from companies like BPA to verify a print publication was reaching the advertisers target market. As the media options became more complex and moved to digital over print, advertisers were forced to try to digest all new audience and traffic data. While the need for audience and traffic accountability should have increased, advertisers became less focused on the audited statements and the verification of audience/traffic information provided by third-party assurance companies like BPA. Advertisers did not understand who BPA was and how an “audited” audience statement could help with their media selection.

In order to try to make advertisers more aware BPA and educate them on the importance of an audited media statement, Interline recommend BPA conduct a postcard mail and email campaign to senior marketing executives. Interline designed a series of 15 postcards on various sections of the BPA audit statement. The focus of the campaign was to deliver a message on how BPA could help “make media buying better” for advertisers. To supplement the emails and postcards, Interline built a micro-site for BPA to provide more detailed information on each of the topics in the email/postcard series and further link the advertiser to the BPA website for more details. Before rolling out this marketing campaign, Interline tested both the mailed postcards and email communication to 1,000 executives. A few of BPA’s media members provided a target list marketing professionals addresses and emails for testing this marketing campaign.

After the test series of four different postcards and emails, Interline and BPA to analyzed the program. Due to how quickly contact lists change, postcards were less effective than e-mail. BPA and Interline determined the roll-out would be an email campaign only.  In addition, feedback from marketing professionals indicated messages were complex for digital delivery. The email roll-out strategy was, therefore, re-designed to a simple Q & A format with links to where the more comprehensive information was housed — on the microsite (www.bpamakesmedia.com) Interline created specifically for the campaign. With additional support from BPA’s media members, the email roll-out was sent to over 7,000 marketing professionals with open rates of over 20%. Still an on-going program, this campaign keeps BPA’s name in front of marketing executives and provides education on all the benefits an audited media statement offers.  The BPA micro-site has helped BPA build better SEO, while also providing program measurement tools and a place where detailed information is neatly contained for reference. 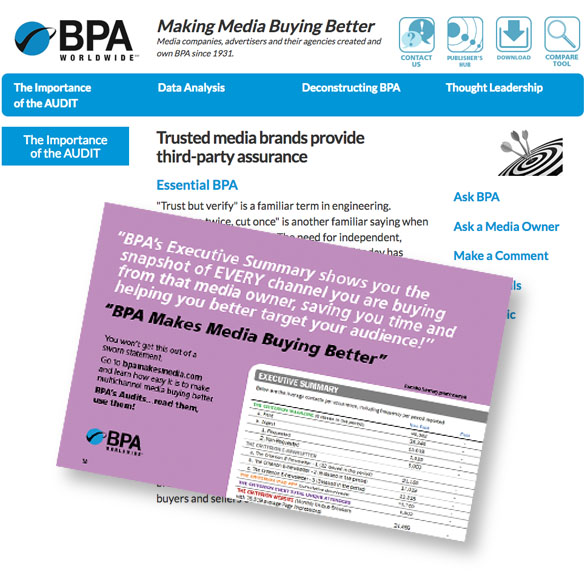