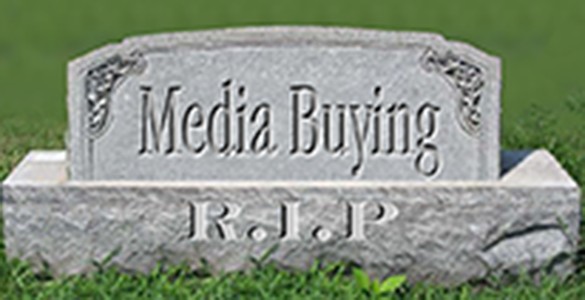 Traditionally, media buyers sought audiences where their targets aggregated using advertising tactics for either building their client’s brand image or generating leads (or both). The theory has always been to maximize the reach – get as many people to see your message as you can for the buck. Since your real targets were always hiding among larger clusters, you did your best to understand those clusters and the targets within. Demographics, psychographics, etc. helped the media buyer try to understand the composition of the cluster.

The problem today is that the larger clusters are gone, leaving targets fully exposed. And while targets still aggregate, they usually do so in plain sight of the advertiser. Thus, when you want to reach them – aiming directly – you can. Except they may not be listening at the time. In fact, they are more likely to tell you where and when they are available. In fact, they may change their minds about where they will be at the last minute, so you waste your time and money. You can’t keep up? Too bad. They are in charge of the communication – not you.

That kind of activity makes media buying unsustainable. Media buying as we know it will die, and in its place will be exposed targets aggregating to content generated by not you, but by themselves. Many have called this shift the Age of the Customer, but it has always been about the customer. However, until recently, the customer has been a passive receiver of messages, with little or no control over how or when they receive the message. Now, because of the Internet and other technologies, targets (customers) no longer have to wait for anything, including information on new products or you telling them how fantastic you or your product is. They simply talk among themselves. They are in control – not the brands. And that scares the brands and their agencies to death. In fact, John Donne comes to mind:

“No man is an island, entire of itself … because I am involved in mankind, and therefore never send to know for whom the bell tolls; it tolls for thee.”

The Bell Tolls for Me and You

There will be no miracle that will revive media buying either. For example, what we see going on now – programmatic ad buying – is a feeble attempt to “save” the media buyer. Until brands understand that they are no longer in control, lots of money will be spent and wasted serving up advertising to people who have no interest (not to mention the fraud involved, which will reveal itself in a matter of time).

The only thing the brand can do today is serve up content, have people find them, and then cultivate them as their customers and targets individually, one at a time. Here’s more proof. The table is from 1990, from the American Business Press (now known as the Association of Business Information and Media). At that time, they spent $150K on the research to prove their point: that business publications matter.

But how true was that research, really? In 1990, the world was changing – dramatically – and this research missed that change entirely. Looking at our chart, it’s clear what’s missing: the Internet, in all of its forms (social media, e-commerce, YouTube, etc.), which was just then emerging. The segmentation of all those channels since then has altered forever how people engage with brands. Simply look at the channels mentioned above today to see the turmoil!

So while in those days you picked a few media, bought them, and figured out response rates, today, you can’t possibly buy effectively: there are simply too many choices. The real formula is finding the exposed targets first, and then becoming part of their conversations.

Firing on All Cylinders

The truth is that you have to be in as many places as possible to reach these targets individually. Since that’s unaffordable, especially in today’s environment, better you stay in one place (your website) and have everyone come to you. Better to start firing on all the media channels available to you, engaging them when they allow you to do so. In other words, stop shouting and start listening.

That means SEO…content…being what you (as brand) really are and then having those who are “interested” find you and become part of your community. It’s not a monologue: it’s a dialog.

You don’t need to run a campaign on Facebook; simply tap your community and let them spread the word around. It’s a new world.

Doubt it? Then simply look at the explosion of brands in the fashion industry. Or any industry. Before this shift, you had leading brands that spent years building up their “brand power.” No one could touch Ralph Lauren, Gucci, Michael Kors, Louis Vuitton or Chanel. At one time, these captured 75% of “luxury” brands. Today? Coach breaks under pressure and will begin discounting its products. Zegna is the largest luxury menswear brand in the world says Lisa Wang, but they do it in China. The fragmentation of every industry means one thing: you better start listening. Build value into your brand not by “advertising,” but by having people get genuinely excited about you (by the way, advertising will not die; it will morph into something else, but that’s for another story).

You are better off measuring your own viewers on your website, nurturing them, and then testing various channels outside of your control than thinking you can buy exposure the way you used to. Think about just this fact: Qualcomm is predicting that between 2013 and 2017, seven billion smartphones are going to be sold. That’s on top of the billions that already exist. How does that work for a media buyer reaching your targets? Do you think people use their smartphones to receive advertising messages?

That is the situation today: consumers – the targets of our brands whether you are B2B or B2C – dictate the platform of where and when they want to be engaged with us. And, that’s why media buying the way we knew has died. Our targets are no longer for sale. When Sergio Zyman Coke’s former marketing guru wrote The End of Marketing as We Know It in 1999, he may not have realized it, but he was actually predicting the end of everything as we know it in advertising, too, including media buying.

The good news is that endings usually mean beginnings. In evolution, you adapt, change or disappear. While the media buying agencies of today will disappear, the evolution from media buying to media finding will emerge, and we will have media finders – people who locate clusters of customers to target for a brand, and then hatch strategies (conventional and unconventional) to talk to them on an ongoing basis to “sell” them — not buy them. In short, a regular tweet is as much of an “ad” as an advertisement was. A post on Facebook is as much an “ad” as running a campaign in Vogue was. Your media strategies are evolving. What those strategies will be remains to be seen. But in any case, those strategies will NOT involve buying something based on who you think is out there. You will know, with certainty, because the channels you use let you see your targets engaging with each other – and ultimately with you.

For more conversation on this topic, e-mail jim@interlinegroup.com.