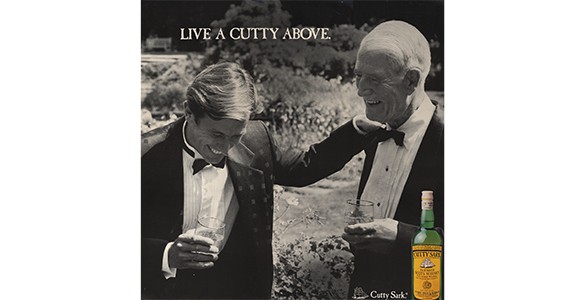 Rorschach inkblot tests are used in psychological evaluation. Psychologists use them to try to examine personality characteristics and emotional functioning of patients. They are used in forensic assessment, too, and in diagnosing underlying thought disorders, differentiating psychotic from nonpsychotic thinking (or so they say).

Hermann Rorschach’s (1884-1922) development of his “form interpretation test,” better known as the inkblot test, is one of the earliest versions of the projective technique. We have our own version of the Rorschach Test that we use with employees.

Our test uses an image from a poster that I obtained many years ago when I worked in a downtown Chicago ad agency. I saw it on a Metra train, and managed to secure a copy. It hangs in my office. I was a creative director at the time, and I always liked this image because it invited you to tell a story to go with it, which is what Rorschach tests do: invite you to tell stories about what you see.

Referring to this image hanging in my office, I ask people: “What do you think is going on in the picture?” I tell them there is no right or wrong answer. “I’ll tell you what I see, too, when you are finished.”

The responses are always interesting, because in our Rorschach test, we’re not measuring anything except the ability to use your imagination and tell a story. Or are we?

Responses cluster around “a wedding” or “they are laughing at a joke” or “Is that Robert Redford on the left?” Sometimes the story-teller goes into a full-length script. Other times, I work to help the story be told (i.e. “What is the joke about?”).

Recently, we had a young intern working for us over the Christmas holidays. When I showed her our Rorschach test and asked what she saw, she answered in many of the usual ways (wedding, laughing at a joke, etc.). I probed with questions such as, “Who told the joke?” or “Why is his arm on the man’s shoulder?”She answered eagerly with additional details.

When we finished, I had to ask one more question because almost always, people say, “I think the one man looks like Robert Redford.” So I asked:

“Does the man on the left look like Robert Redford?”

“I don’t know who Robert Redford is,” she meekly admitted. “He’s a movie star,” I helped. “I never saw any of his pictures,” she said, eyes cast down. (I learned subsequently she Googled him on her phone, which she carries with her at all times, and found out who he was before going home that day.)

It dawned on me when she said she didn’t know Redford that the essence of communication is shared experiences. In fact, if we do not have a common ground about what we are talking about, communication is really impossible. Take Humpty Dumpty.

Humpty Dumpty took the book and looked at it carefully. “That seems to be done right —” he began.

“To be sure I was!” Humpty Dumpty said gaily as she turned it round for him. “I thought it looked a little queer. As I was saying, that seems to be done right — though I haven’t time to look it over thoroughly just now — and that shows that there are three hundred and sixty-four days when you might get un-birthday presents —”

“And only one for birthday presents, you know. There’s glory for you!”

Humpty Dumpty smiled contemptuously. “Of course you don’t — till I tell you. I meant ‘there’s a nice knock-down argument for you!'”‘

“When I use a word,” Humpty Dumpty said, in rather a scornful tone, “it means just what I choose it to mean — neither more nor less.”

“The question is,” said Alice, “whether you can make words mean so many different things.”

“The question is,” said Humpty Dumpty, “which is to be master? — that’s all.”

So, if we followed Humpty’s philosophy and make words mean what we want them to mean, then I could have defined Robert Redford as one of the people who used to work here and be like Humpty – guilty of bending facts to suit my need. But, the point is that unless we agree on definition of terms (thank you Aristotle), then communication is impossible.

The same is true of knowledge references. If we all know who Zeus is, then using Zeus in sentences can make sense. But, if we don’t, then Zeus becomes, like “glory,” meaningless.

During a Forrester research breakfast event last year a professor sitting at the table was bemoaning the fact of students not being able to write with clarity these days. “In fact, I recently graded a paper that was citing Siri as the reference,” he said. “Can you believe that?”

One of the groups that almost everyone is trying to figure out these days are Millennials. One of our trade journals – ADWEEK – recently had an article on how Shane Smith Built Vice Into a $2.5 Billion Empire. What caught my attention was this line:

“Vice has found that magical point of convergence where good journalism, positive cash flow and (most elusive of all) the millennial attention span meet.”

I explored the website and have made it part of my weekly visits, finding stories as diverse as “Rand Paul’s New Tech Guru Wants to Build a ‘Crowdsourced Campaign’” to “Masked Thieves Loot Luxury Berlin Department Store in Daring Daytime Heist” to “Technology Is Making Us Stupid.” Not at all what I would normally read, but if that’s what is attracting the hard-to-reach Millennials, heck, I wanted to know about it.

In talking with our intern, I brought up vice.com and immediately generated a smile. We discussed what she thought about it. While she knew about and visited it, it was not “one of the regulars.” Still, I know it surprised her I knew about it. I guess you can say with Robert Redford and vice.com, we now have a couple of shared experiences!

Let us know what you think about your shared experiences, won’t you? Thanks for reading our blog.