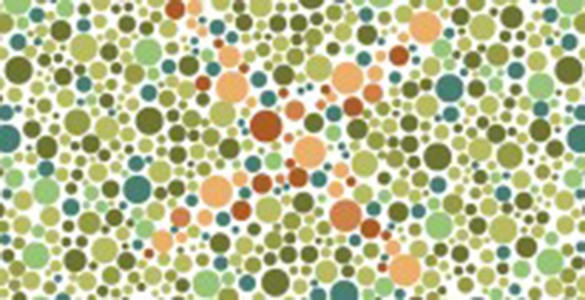 I was born red-green color blind, but didn’t know it until I got to college. I remember being in a psychology class, and we came to page where there were circles of color. The instructor was pointing out that these were used to determine color-blindness; that there were numbers in the circles, and if you couldn’t see them, you were color blind. I laughed. I nudged the kid next to me and said, “He’s kidding us, right? Some kind of psych fake out.” “No,” he said. “There’s a nine in the circle.”

I couldn’t see it. I said, “Don’t be a jerk.” We almost fought. In the end, they proved to me that there was a nine in the circle, and if I tried really, really hard, I could almost make it out.

But something funny happened after I realized I was color-blind. I became afraid to have other people know it. Don’t ask me why; I was ashamed maybe, or maybe I didn’t want people to know about my handicap. What I did, instead, is train myself to see the red and green that other people saw. I learned that in my color-blind world, the real reds and greens had shades and variations. I would ask my Mom to tell me what is red, what is green. And I learned.

The best way to fake it was to have a red or green next to something else, or “learn” the patterns involved. For example, in a stoplight, red was always on top. When the light is a single light and blinking, the red is deeper than the yellow flashing light for me (and when I’m in doubt, I just assume it is red and stop until someone honks behind me). And so on.

Did I make mistakes in judgment? At first, but then through practice, I was able to be with “regular” people and they never knew about my deficiency.

There was a by-product of this exercise: I didn’t care about color. In my ad agency days, I would witness sometimes violent arguments among art directors, clients, and printers about color. I would ask myself, “What’s all the fuss?” I learned to fake my way in these situations, able to argue either way. Like a good lawyer, I could be for “more red,” or “less.” Because I also learned that colors are comprised of combinations of other colors, and an infinite variety exists in the real world. More important, color, I learned, is really entirely subjective; that your red isn’t the next guy’s, and while perhaps close, if we didn’t have the miracle of the human light and eye, well, a little evolution and we wouldn’t be able to see anything at all perhaps. I didn’t feel too bad after that discovery!

The problem with dots, like I said, is that you really have to be sure when you start connecting them that you have all of them that you should have — or you get a really wrong picture. That’s why I have learned to look outside, for patterns, rather than color. People see things that they are used to and because they get used to it, don’t realize that they aren’t looking at all the dots.

At a recent client meeting, we were told that a service we had been performing for the past 15 years was no longer needed – that it was moving. When clients make that kind of decision, there is nothing you can do about it to salvage it. The client then turned on the computer and started to type, asking if I can explain what our role was in performing the service, that notes would be taken…can I help them understand what’s involved in that decision. I realized at that moment that the client didn’t see all the dots, and had connected the ones they did see and had gotten a really wrong picture about all that was involved in what we do performing that service.

In our businesses, one of the things we are really guilty of is hiding the dots – making the puzzle look easy. That’s what we do as service providers. So when a client decides to “do it themselves,” they are only looking at a partial picture. We don’t do this intentionally; we do it because that is the business we are in: superior service, and superior service dictates “pain free.”

So as I began to put more dots on the puzzle for my client, it was clear that I would not be losing the entire service for awhile; what stood out most of all was their not thinking it through, not seeing all the dots.

But then, that’s ok. We exist to serve our clients. We exist because like someone who is color-blind, we have been able to see patterns and make those patterns work for us and our clients. Where people can’t see that “X” marks the spot, we see patterns and shapes that perhaps led to new revenue streams. Our accountant is still trying to figure out what business we are in!

The next time people ask you to connect the dots, make sure you see them all. Or, find a color-blind guy to help you see the pattern. By the way, what is curious about my blindness is that I can’t really explain what I see to you; so while I can tell you that there is an “X” in that box graphic with this blog because my graphic designer told me it’s there, I can’t really explain to you what I myself see because, well, you’re not colorblind, and I don’t have a reference point to give you.

For a discussion about patterns in business, contact us at: http://intrln.com/contact. Thank you!