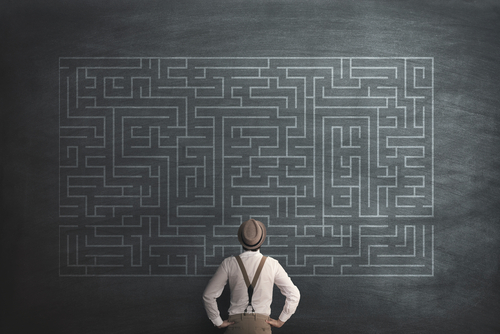 Any service provider needs the power to fix problems. If you don’t have that power – or your company won’t give it to you – you’re useless.

When people call customer service, they are powerless.

There is only one thing that gets rid of powerlessness: power.

In other words, the person you are calling must have the power to help. Help nullifies the feeling of powerlessness and substitutes relief.

Powerlessness is one of the worst— if not the worst — feelings a human being can experience. Most people who have experienced powerlessness will tell you that. Some will argue feeling powerless is worse than physical pain.

I actually blogged about powerless in a post called “What I Overheard at the Airport,” where I heard powerless in the voice of a person on the phone. I think you might like it, especially after you read this latest tale.

A Tale of Service

One of my employees retired at the end of August. I notified my SIMPLE plan administrator via e-mail, a Brokerage Firm with 9,100+ employees and annual revenue of $5.4B, to stop the automatic deposits into this account. My financial consultant responded, assuring me (replying to my e-mail) this will happen.

The day before Thanksgiving, my now-retired employee called me and asked, “Why are you still sending deposits into my SIMPLE account?” He had closed his account with the Brokerage Firm and moved it to a Bank – a bank with 189,300+ employees and annual revenues of $2T.

I called my financial consultant. He made a few calls and called me back, saying, “This is entirely our fault. Let me take care of it immediately. We’ll put back the money ($1,500).”

By the end of the first week of December the money had still not been put back into my account.

My financial consultant called me and was extremely nervous. His voice shook. He said he was on the phone for hours talking to multiple people in different departments within his 9,100+ employee organization trying to get this solved. He got nowhere, so was calling me.

He told me to call the 800 phone number.

When people tell you to call the 800 number, that’s usually a sign of desperation.

The first person I talked with, after getting through the prompts, was Steve. He started blaming me for the mistake.

He said things like, “I have no evidence you closed this account…you really shouldn’t be dealing with your financial consultant to do this…you can do this yourself in your account…whose account is this?”

I explained this account is part of my SIMPLE plan, controlled by government regulations, and that his  company was my partner in this relationship.

“You send letters to my employees about it,” I told him. “Besides, you stole my money and I want you to put it back immediately.”

The “stole” word stunned him because he put me on hold to “check with some people.” Then I made a serious error: I hit the wrong button on my phone and disconnected the call.

The feeling of powerlessness continued to grow.

I called back and got Sandra on the phone. She was able to pull up the “case” and familiarize herself with it quickly. She said the case was already in motion, and that it was started today.

I said, “But I called my financial consultant last week before Thanksgiving.”

She apologized saying there is no record of that call, and said there are now two people on the case and that it should be solved by next week. I thought, there are a lot of recordings when you have a 9100+ people organization.

“I appreciate that,” I replied and added, “but how did such a thing happen when I notified your company to stop the transactions in August?”

She asked permission to put me on hold for a few minutes.

When she came back on the line, she said: “I can neither confirm nor deny that this was the reason, but in looking this over there were two deposits going into your employee’s account each month, is that right?”

“I can neither confirm nor deny, but it looks like when you ordered the deposits to stop, we only stopped one of them. But I’m not confirming or denying this happened.”

“So, you can see that I did order the deposits to stop?”

“Yes,” she said. “I think this is human error, but I can neither confirm nor deny that to you.”

I thought to myself, “That’s an interesting way to put it. Ah, lawyers.” Then, I asked, what exactly has to happen to fix this problem?

I was silent for a several seconds. “Do you know how absurd that sounds,” I asked, “when you made the mistake of moving it in the first place?”

“That’s the process,” she admitted with slight touch of regret in her voice.

I thanked her for her time and said, “Can you send me an e-mail when this is concluded and the money is back in my account?”

I was going to ask, “But how will anyone know to review my file,” but I didn’t. Instead, I offered a piece of advice to her.

“Next time, when it’s your fault, put my money back as soon as you realize it and then figure out how to get it back from the Bank. You see, it’s my money you stole. I know stealing is a strong word. It’s really a small mistake for a company your size. But, you did take the money after I told you not to. What should we call that? Even if you call it a mistake, human error, mistakes happen. I get it. Besides, it’s going to be two weeks before I get the money back – if I get it back. I lost interest on that money, didn’t I?”

In my story, many people were powerless, not just me. The frustration of being powerless was felt by the people I spoke with, even Steve.

The only way you erase powerlessness is if you have power. Out of the 9,100+ employees at the Brokerage Firm, someone in some back office in that organization had it. Yet, even that person had to “automate” the process and wait. The problem remained the problem, and the powerlessness remained.

In our company, that mistake would have been fixed in ten minutes. I would have put the money back into the account and then figured out with my people how to get it from the new Bank, and how to avoid that mistake in the future.

As a customer, I don’t care about how you fix a problem. As a service provider, I need to empower everyone to solve problems. As a customer with a problem, when you feel powerlessness, it’s hard to care about anything except getting rid of the problem. As a service provider, powerlessness nullifies your existence and puts you in the same boat as the person you are trying to help. You both drown.

How does your company handle problems? Let me hear from you.

[1] “Hello. This is Steve. we were just speaking and I think we got cut off. I was having you on hold to get to the bottom of the case and we were disconnected or you hung up, so I just wanted to reach back to you and let you know that we did research into the account. We looked at the calls and unfortunately there is no note for the email that you sent to your consultant to stop that particular thing. But there are lots of correspondence between you, and you know, as far as the little tables that you sent of people with names and how much they’re supposed to get transferred and for how much the amount and all that stuff, so you know the latest one was that we got from you was back in January 2019 that stated that and he was supposed to get $1K per month but we don’t have a letter of instruction like you sent before stating OK to go ahead and cease that particular reoccurring transaction. So what happen is when you gave it to your consultant, apparently only one transaction um stopped which was the August one um and in the system it’s a little more tricky. Now if you had sent the letter of instruction like you did before all of the other correspondence the back office you know with more of the expertise in here to get all future payments stopped but apparently what happened is because we don’t have a way to track that and what exactly took place. But only one payment and the future postdated payments for the following month did not get canceled um and there was a letter of instruction on file we can’t really read or trace back to see, you know, who did what. I apologize but um you know for future reference um just send a letter of instruction basically stating like you have in the past that I am so and so and I would like to have this particular person not have any future payment sent to them as an internal transfer and upload better. You send it to us usually or you can drop it off at the branch and will get that in the back office. Thank you for calling today and I hope everything will work out. bye-bye…”

3 thoughts on “Powerlessness: Why Organizations Fail at Customer Service”