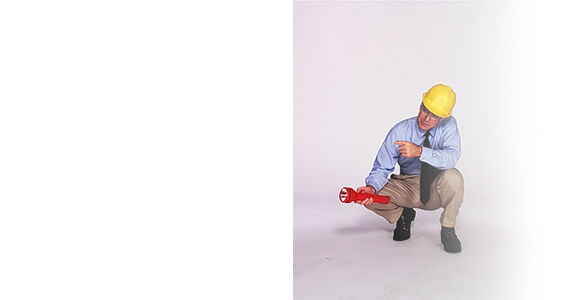 One of our major association clients who is also a publisher of a key industry trade publication told us their budgets were slashed as member companies were closing because of COVID-19.

“Our conference had to be taken down,” he said. “That was a million-dollar swing. People were already paid to do things – but those things never happened. Despite negotiations, we have to refund all the money, pay the time and materials for housing reservations we cancelled. Very difficult.”[1]

He continued explaining the effects of the virus on his association and his staff. He pointed out that one of his related media outlets wanted to flip the switch from a physical to a virtual conference, one that his association used to sponsor when it was live. My client asked a simple question: “What do I get to be a big sponsor?”

The organizer said exposure, contacts from the virtual event. “These are hard people to see,” the organizer said. “We’re opening the doors for you to see them, only virtually this year.”

My client asked within his own organization to “see” the contacts from prior conferences in order to determine quality and quantity for the effort. My client uses the most sophisticated CRM to maintain his databases. He was told by his staff, “Well, they’ve never been put in there from the last time.”

Even before COVID-19, media outlets were in trouble, which began when the Internet arrived. COVID-19 has only made things worse.

Pre-COVID-19, the formula for their success – print advertising – was simple: they had audiences, and companies paid money to reach those audiences with their ads.

When the Internet arrived, a strange thing happened: the audiences bolted. They escaped. They ran out into the Internet like horses escaping the corral. Media outlets are still trying to round them back up.

The dirty little secret is audiences can’t be corralled by any media outlet any longer: audiences can only corral themselves around media outlets, or in today’s world, bloggers, influencers, social media channels, websites, you name it. Audiences, which were the media outlet’s key to revenue, vaporized.

Stuck in their homes because of lockdowns, audiences ran to the digital channels. Total internet hits have surged between 50% and 70%, according to preliminary statistics. Streaming has also jumped by at least 12%, estimates show. Omdia predicts $11 billion losses for the movie industry with a 25% decline and a 15% drop in TV advertising, especially for ads promoting events such as concerts that can no longer take place.[2]

As the rise of smartphones accelerated the trend towards online consuming news and other forms of journalism at the expense of newspapers and magazines, advertisers gradually moved their budgets online as well, forcing many print publications out of existence.[3]

According to a new forecast from GroupM who studies these things, the worst may be yet to come for publishers in the United States. GroupM expects newspaper advertising revenue to be cut in half once more within the next five years, bringing the total to $5.5 billion, down from more than $25 billion in 2012. 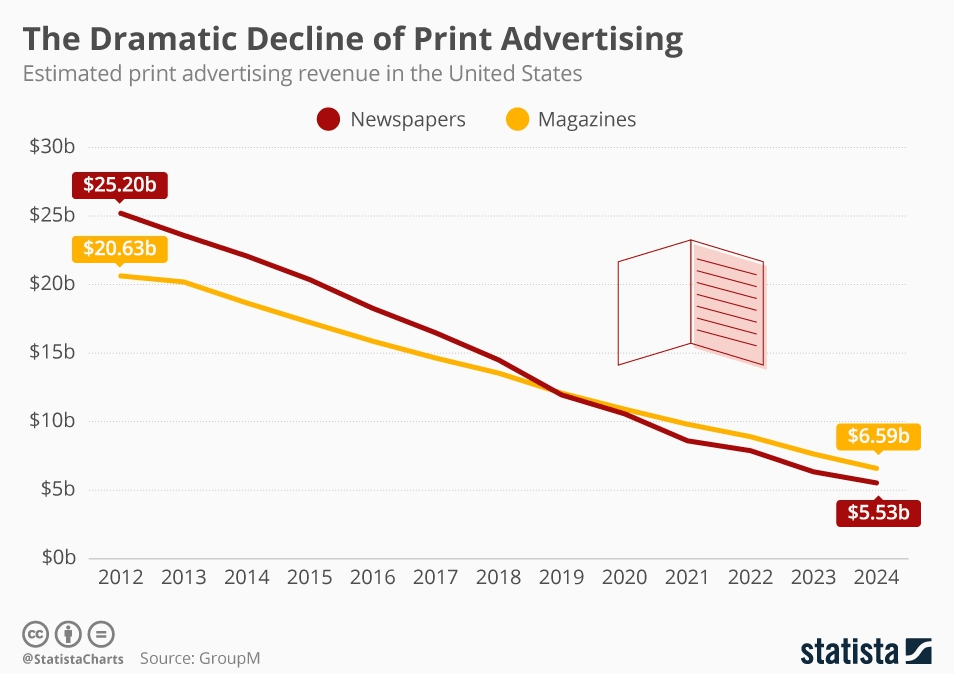 The goal of advertising of course is engagement that leads to sales. The audiences that companies want to engage with have, as pointed out, deserted their channels for the Internet. So it stands to reason that the media outlets followed them out to the Internet. And as digital media expanded, circulation of print titles fell, making what was left of print less worthwhile for marketers than ever before[5].

Proving engagement was an entirely different value proposition on the Internet. Today, most media outlets view advertising as a “complementary source” of revenue rather than the main source. Scrambling for revenue sources, they try different things – and usually don’t produce much results. Based on MediaRadar analysis, there were 151,825 advertisers in print in Jan-Apr 2018 representing a decrease of 13% year-on-year (net decline). In reality, 87,943 brands stopped buying print altogether.[6]

Scale is the primary draw for advertisers through enormous digital ad networks which is actually self-defeating. Scale is an illusion. Just ask any publisher to prove who visits their websites and you’ll get blank stares.

Helen Bazuaye, global editor in chief of IKEA magazine points out, ““We were told repeatedly print is dead – plus it’s expensive. Digital natives want stuff for free, so print is always going to be and seem a lot more expensive than a digital alternative. Digital can produce cheap, quick results. However, we’re coming to a tipping point where mistrust and familiarity with digital is starting to blunt its effectiveness.”[7]

In the most optimistic scenario, print ad spend is projected to decline another 29.3% in 2020 according to Dan Schechter, Stephen Matthews, Michael Kaufman and John Harb from L.E.K. . a global management consulting firm (US Print Ad Outlook: COVID-19 Implications).

Show me the people

Recently, we deployed an email blast for a client to a media outlet’s list. The deal was simple: for a few thousand dollars, the outlet would send it out to their list and we would receive the names of anyone who clicked on the email blast.

However, because we study such things, we built in a form into the blast; that is, there was a link within the html that led to a form that could be filled out by a target. The discussion even in our own agency was, why do a form if we will receive the names?

The answer is lists atrophy at alarming rates. More important, if that email blast is sent further around the target’s company (or as we have learned, since people talk to each other outside the company), there would be no way the media outlet would know the name. As pointed out, audiences have escaped.

Within one hour of deployment, we had 9 people fill out the form. We are still waiting for the media outlet’s names to see if these were on their file at the time of this writing.

The point is, advertising has never just been about exposure. It’s been about sales. As difficult as that is to understand, that is what media outlets understood and by selling “exposure” were able to sidetrack the real intention: sales.

Today, EVERYONE is a media outlet. Any business with a website is a media outlet, competing with other media outlets for attention. In Rorschach Test: Who Is Robert Redford?, Shane Smith, the man who built Vice into a $2.5 Billion Empire, said something profound: ““Vice has found that magical point of convergence…We want to do three things. We want to make good content, we want to have as many eyeballs as possible see that content, and we want to make money so that we can keep paying to do that content.”[8]

So if the question is engagement, then the real test is how much you engage, how often you engage, and where. COVID-19 doesn’t change that. It might limit temporarily physical contact, but if a company were to weigh physical contact against all other forms of sales contact, physical – while the most expensive – would probably be dwarfed by digital.

Today, media outlets are beside themselves trying to survive. They are confused, failing, and miserable because they can’t find their value proposition. While that may sound like a generalization, you can prove it or disprove it for yourself by asking a simple question: what are you getting for your advertising investment in a media outlet?

If engagement is the goal, why do you need a middle man? Do we really believe a media outlet is a matchmaker between people who want to buy and sell things? To be engaged, you need content, and an audience to engage with around that content.

On their website they have a blog called Dialogue. Here they produce points of view about everything impacted by COVID-19. No advertisements (except their own because it’s on their website). Hopefully they monitor who visits through technology like reverse IP lookup. And they pound out content that would make any media outlet jealous.

Associations like AIA do the same thing. The thirst for content by people can’t be underestimated, but it can be satisfied by companies once they realize that they themselves are the media outlet.[9] Google, don’t forget, reads everything. The Internet has all the eyeballs, and the door to them is Google. That’s what media outlets don’t understand. They don’t “own” any people. Neither does Google. People consume content at THEIR will, not the media outlet’s.

You can’t have, therefore, enough content. In the world of engagement, more is more. Less doesn’t exist. And content is not affected by COVID-19. There’s a whole set of different viruses for that!

[1] More than $1.5 billion loss as a result of the impact the coronavirus is being reported just at McCormick Place this year. Hotels also suffered, with nearly 1,181,045 room nights lost. A total of only 61 percent of the canceled conventions are planning to return. Trade Show Losses At McCormick Place Amid Pandemic Has Cost Nearly $1.7 Billion by Suzanne Le Mignot, July 28, 2020.

[4] GroupM is the world’s leading media investment company responsible for more than $63B in annual media investment through agencies Mindshare, MediaCom, Wavemaker, Essence and m/SIX, as well as the outcomes-driven programmatic audience company, Xaxis According to GroupM, Internet-related advertising is now unambiguously the most important medium globally, with $326 billion in ad revenue during 2020, up from $294 billion in 2019. Accounting for 52% of global advertising tracked here during 2020, digital is taking share of advertising in almost every country in 2019 and should do so in all of them in 2020. THIS YEAR NEXT YEAR: GLOBAL MEDIA FORECASTS by Brian Wieser, Decembner 9, 2019.

[6] Print advertising is in decline, but advertisers not moving to digital, by What’s New In Publishing.

[7] Helen Bazuaye, global editor in chief of IKEA magazine Spend is down but the power of print keeps rising by Print Power, February 7, 2019.

[8] Rorschach Test: Who Is Robert Redford? By Jim Nowakowski, on www.interlinegroup.com.

[9] MY E-MAIL BOUNCED BUT HIS DIDN’T. NOW WHAT? was a blog we posted on April 2018 and has since (just from the shorted link we use for tracking) been consumed over 10,000 times. This isn’t counting the direct consumption that comes from Google searches directly, or from shared linking.